Islamophobia
in the workplace 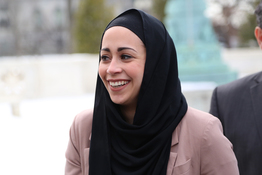 In March 2008, the 18-year-old female applied for a job stocking merchandise at the “Abercrombie Kids” store at the Great Mall in Milpitas, Calif.  In accordance with her religious beliefs, she wore a colorful headscarf to her interview.  According to the EEOC, the Abercrombie & Fitch manager asked if she was Muslim and required to wear a head scarf, then marked “not Abercrombie look” on the young woman’s interview form.  The EEOC’s suit alleges that Abercrombie & Fitch refused to accommodate the applicant’s religious beliefs by granting an exception to its “Look Policy,” an internal dress code that includes a prohibition against head coverings.

“This was the first job I ever applied for, and I was excited about the idea of working for Abercrombie & Fitch,” said the job applicant.  “I was into fashion, and wore skinny jeans and imported scarves that matched my outfits.  The interview crushed me because I never imagined anyone in the Bay Area would reject me because of my head scarf.  To this day, I can't walk into Abercrombie & Fitch stores.  They didn't just miss out on a hard worker, they lost a customer.”

Under U.S. law, Abercrombie & Fitch is required to provide reasonable accommodation for workers' religious beliefs. Abercrombie's strict clothing policy
makes no exception for Muslim women, a clear violation of the law. This example of islamophobia in the workplace is an example of hiring discrimination- hiring policies illegally based on an applicant's religious beliefs.

Furthermore, Abercrombie denied any wrongdoing. They put the blame on the Muslim woman, arguing that it was her duty to specifically disclose that her hijab was for religious reasons, and thus her responsibility to specifically ask for religious accommodation. They claimed that they did not even know the woman was Muslim, pleading complete ignorance.

This is not the first time that Abercrombie has been accused of discriminatory practices - it settled a $40 million lawsuit a decade ago for discriminatory hiring, promotion, and marketing practices among black, hispanic, and asian american women . This long history of illegal practices demonstrate that this case is no exception, and a prime example of islamophobia in the workplace. 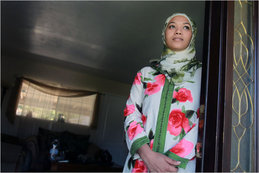 A Disneyland employee refusing to wear a Disney-supplied hat on the job, in place of her traditional Muslim headscarf, has charged Disney with religious discrimination.Imane Boudlal sits at home in Anaheim, another day away from work. She is embarrassed by a costume that her employer, Disneyland, offered to her to wear. The hat is meant to replace her hijab, the headscarf, a part of her Muslim faith.

"It's ridiculous, just making fun of me and my religion," said Boudlal.

The 26-year-old accuses Disneyland of discrimination for not letting her wear her hijab at work.

For more than two years, Boudlal has worked as a restaurant hostess at a Disneyland resort. Last week, she decided to start wearing her headscarf to work.

She was sent home without pay seven times since then, rather than removing her hijab or accepting positions out of view of customers.

Disney officials say they offered Boudlal several options: "She asked that the costume be altered. Those alterations were made and a modified costume was presented to her that meets our costuming guidelines and which we believe provides an accommodation of her religious beliefs. We also provided four different roles that she could transition to that would allow her to wear her own hijab. She has twice chosen to reject all of the options that we've presented."

Imane Boudlal, a former Disneyland employee is suing Walt Disney Company over alleged religious discrimination and harassment during her two years of employment. Boudlal claims that she faced discrimination when she started to wear her hajib full time in 2010. Furthermore, she suffered ethic and religious slurs by her co-workers who mocked her by telling her that Arabs are terrorists. Though her concerns were brought to management, no actions were taken.

Under U.S. law, Walt Disney Company is required to provide reasonable accommodation for workers' religious beliefs. According to Disney, the company offered multiple alternative options to accommodate her religious beliefs. However, such options were allegedly rejected by Boudlal. Boudlal is seeking damages and harassment and discrimination training for Disney employees. In addition, she's asking that fellow Muslim Disney employees be able to wear their hajibs without restriction.

According to the EEOC(s suit, the company failed to provide an accommdation to four Somali women of the Muslim faith by not allowing them to work while wearing their hijab or head scarf, as is their custom of their faith.

Title VII of the Civil Rights Act of 1964 requires employers to reasonably accommodate the sincerely held religious beliefs of employees and job applicants so long as such measures do not cause undue hardship to the employer. The EEOC filed suit in U.S. District Court for the Western District of Kentucky, Louisville Division (Civil Action No. 3:06-cv-00353-CRS) after first attempting to reach a voluntary settlement out of court through its conciliation process.

In a third similar case, Muslim women were discriminated based on the wearing of a hijab. The incredibly high occurrence of headscarf-related work discriminatory cases correlates with the statistics we found: nearly 23% of all work discrimination cases were related to a hijab. This small settlement, while a sign that these practices are unacceptable, are still much too common in the workforce. 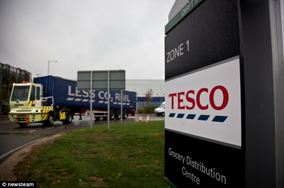 Article:
Two Muslim Tesco workers have won a discrimination case against the supermarket after bosses kept their prayer room locked. Abdirisak Aden and Mahamed Hasan, both aged 27, were among a number of devout Muslim employees who had lobbied for a prayer room since 2006. In 2008 managers agreed to set aside a security office at the distribution depot in Crick, Northamptonshire, as a prayer room for Muslims. But in 2012 bosses set new restrictions on the use of the room which included keeping it locked when it was not in use. Muslim workers were forced to tell managers when they were going to pray and had to ask for the key and fill in their names in a book every time they entered the room. They also claimed they were forbidden to worship in groups and were only allowed to pray one at a time. Mr Aden and Mr Hasan took the supermarket giant to a tribunal claiming discrimination on the grounds of their religion. Bedford Employment Tribunal found Tesco was guilty of indirect discrimination and awarded the men an undisclosed sum for ‘injury to their feelings’.


Analysis
In this seemingly unbelievable case, these Muslim men had their fundamental right to prayer violated. As one of the 5 pillars of Islam, daily prayers are incredibly important to any practicing Muslim. These offensive practices single out Muslims solely based on their religion, and publicly embarrass and humiliate while impeding their ability to practice their faith. Furthermore, this case also violates their first amendment right to assembly, demonstrating that "sacred" American laws do not necessarily apply to "otherized" people. 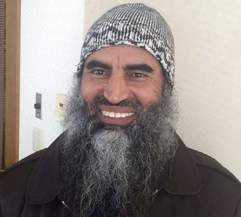 Article:
His co-workers may have not seen past his beard, but the jury did.

A Muslim American man from Ypsilanti has won a nearly $1.2-million jury award after successfully arguing he was harassed, taunted and discriminated against at work because of his religion, race and appearance — most notably, his long beard.

Ali Aboubaker, 56, a U.S. citizen and Tunisia native with four advanced degrees, was awarded the judgment on Thursday following a two-week jury trial in U.S. District Court in Detroit.

“We were stunned,” said Aboubaker’s lawyer, Shereef Akeel, who stressed to the jury that his client had several strikes against him.

“I said, ‘Look at him. First of all, his name is Ali Aboubaker. That’s one strike. Look at his beard. That’s two strikes. He’s from Tunisia — an African American — that’s another strike. Can you give this man a fair shake? Look at him, please,” Akeel recalled of the trial.

“And you know what? The jury gave him that fair shake,” Akeel said. “They saw past his beard, past his name, past his race, past his religion. They saw a man who was terribly wronged.”

According to court documents, Aboubaker, a father of four, was an employee of Washtenaw County for 17 years, where he worked his way from bus driver to maintenance technician. He started in 1991 and was fired in 2008 for alleged insubordination — he refused to start working five minutes before his shift officially started.


Analysis
This is another example of islamophobia in the workplace, this time targeting a Muslim man who was fired on the basis of his religion and appearance. Unfortunately for Ali Aboubaker, he has a "Muslim name," the Muslim look (beard), and African origins (Tunisia). It is no wonder that this man was wrongly targeted. He was a faithful employee for nearly 17 years and holds four advanced degrees, but was still consistently passed up for promotions. In fact, he was even passed up for a promotion by someone who was not even a union employee. Not only did he face promotion discrimination and offensive comments in the workplace, but he was fired and ultimately lost much more than just a job. His wife left him and he was left homeless in the peak of the recession.

These unfair practices, while all too common, at least were recognized in this case. He was awarded a $1.2 million settlement, confirmation that the jury recognized the crime and a small victory in otherwise dire circumstances for western Muslims.

*Disclaimer: All photos/ icons/images used in this site is strictly for educational purposes only and not for commercial use.
Photos on this web page were taken directly from the articles cited on our Works Cited page.
Powered by